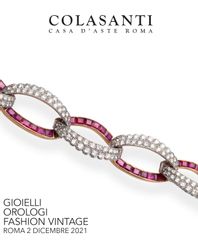 PLEASE NOTE THAT FOR LOTS 1 - 2 FROM SAVE THE CHIRLDREN DONATIONS AND INHERITANCES BUYERS PREMIUM IS 12,5%

The description of the lots does not include any condition report. Therefore, Colasanti Casa d’Aste recommends to ask for condition reports and will be pleased to provide them on any lot on request.

Colasanti Casa d’Aste will not be responsible for anyone for non-observance of this notice.

Art. 1 The objects may sold in Lots individually according to the final opinion of the Colasanti Casa d’Aste, which acts simply as Agent in the name and interests of each Seller as relates to art. 1704 cod. civ. The sale concerns the Purchaser and the Seller. Colasanti Casa d’Aste does not assume any responsibility in relation to the Purchaser, the Seller or any Third Party concerned.

Art. 2 The objects are sold to the highest bidder. The Auctioneer starts the auction beginning with the bid that s/he believes to be the most opportune, based upon both the value of the lot/s as well as the competing bids. The Auctioneer may make further bids or in response to other bids, until the reserve price is reached.

Art.3 In the case of any dispute between more than one Purchaser, the Auctioneer has the right to canceling the sale of the item, or reoffering and reselling the object in the same sale. Each transfer to Third Parties of the lot/s purchased does not become the responsibility of the Auction house which considers the Purchaser as the sole person/s responsible for payment. Bidding at an auction in the name of and for a Third Party may be accepted by the Auction house only after sufficient bank references as well as power of attorney have been received by the Auction house at least three days before the auction.

Art. 4 The Auctioneer, during the auction, may group together or separate lot/s and vary the order of the sale. The Auctioneer may, and his/her decision is final, withdraw lot/s that do not reach the reserve price agreed upon between the Auction house and the Seller.

Art. 5 In order to guarantee the highest levels of transparency during the auction for all those who intend to make bids, prospective Bidders are required to fill out a participation form with personal information and consign a valid document of identification. The Auction house may accept written bids if they are received at least one hour before the beginning of the auction. Should there be more than one written offer with the same value, and are they not beaten by bids made in the auction room or telephone bids, the Auction house will consider the Purchaser to be the one who made the bid first. Telephone bidding requests will be accepted if confirmed and received at least one hour before the beginning of the sale. The Auction house do not accept liability for errors and omissions in connection with telephone bidding arising from circumstances beyond our reasonable control. Should there be a case of identical bids, the oral bid in the room will prevail upon the written or telephonic bid.

Art. 6 A buyer's premium will be added to the hammer price and is payable by the buyer as part of the total purchase price within 10 days from the sale date. The buyer's premium is 25% of the hammer price including VAT for each lot. In the case of lack of due payment, after full compensation of damages made to Colasanti Casa d'Aste, the Colasanti Casa d'Aste may: return the object to the Seller and demand full payment from the Purchaser of the due commissions/premium; undertake action in order to forcefully obtain the obligations of purchase.

Art. 8 The Auction will be preceded by a public viewing of the objects in order to allow for a careful examination (the authenticity, the state of preservation, the provenance, the type and the quality) of the objects on behalf of aspiring Bidders. Following the Purchase, no one will be able to dispute or criticise the Auction house or the Sellers for lack of any quality in reference to object being auctioned, like indications relative to the state of conservation, wrong attribution, authenticity and provenance.

Art.9 If it turns out after the sale that a lot is a forgery, intentionally created after the original object, the Auction house, may recompense the Purchaser the total amount of the acquisi tion in the value in which it was paid, after the restitution of the lot. The Purchaser must give written notice of claim within five years from the date of the auction. The Purchaser must also return the Lot to the Auction house in the same conditions as at the time of the sale, accompanied by at least one certification of one independent expert.

Art. 10 The sale of objects from the XX and XXI century is based on the explicitly indicated certification in the catalogue. No other certification, survey or opinion, introduced after the completed sale will be valid as a protest of authenticity of the object.

Art. 11 Objects declared of importance according to art. 6 D.L. 26/10/99 n. 490 are indicated as such in the catalogue, or are nominated as such during the sale. The Italian State may exercise on this objects its right of pre-emption within 60 days after the completed Sale; therefore the sale will be effective after this period. In the case the Italian State exercises the right of pre-emption, the Purchaser will have the right of recompense of the sum already paid.

Art. 12 The exportation of the lot/s from the Republic of Italy, especially objects older than 50 years, is subjects to the regulations contained in D.L. 26/10/99 n. 490 (art. 65-72). The fact that the Purchaser wishes to apply for an export licence does not affect his or her obligation to make the payment immediately after the sale nor the right of the Auction house to charge storage. It also does not give the right to the Purchaser of cancellation of the sale.

obligation to make the payment immediately after the sale nor the right of the Auction house to charge storage. It also does not give the right to the Purchaser of cancellation of the sale.

Art. 13 These rights and obligations are accepted automatically by all those individuals who take part in the sale.

Art. 14 These Conditions of Sale and any matters connected with them shall be governed and interpreted by the laws of Italy. Every dispute regarding the application, interpretation and execution of the present Conditions of Sale are exclusively assigned to the Court of Rome.

Please note that any lots purchased via DROUOT live auction service will be subject to an additional 1,5% commission charge + VAT at the rate imposed on the hammer price