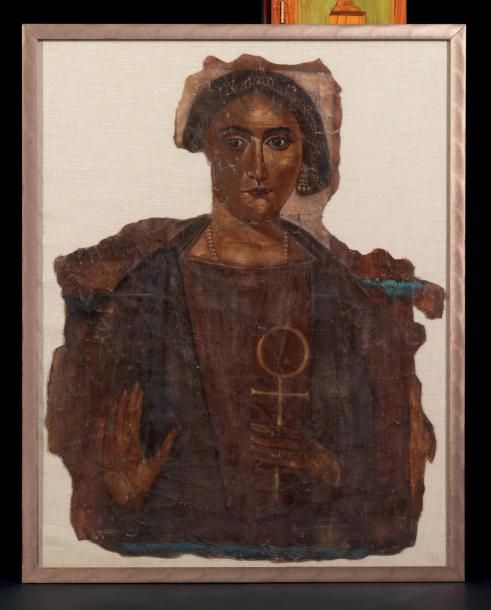 PORTRAIT DE PATRICIENNE En buste, tenant une grande croix de vie Ankh Egypte, IIIe siècle - IVe siècle Matériau Peinture sur toile de lin L. 74,9 cm Restaurations FUNERARY SHROUD OF AN ELITE MATRON Origin: Egypt Circa: 3rd Century AD to 4th Century AD Medium: Paint on linen Dimension: 29.5'' high Restorations The ancient Egyptians pioneered the practice of painting on linen because flax, from which linen is woven, lacks mordents to which dyes can adhere. It is for that reason that most of the clothing depicted in ancient Egyptian art is white, the colour of un-dyed linen. In order to compensate for this lack of mordents, the Egyptians as early as the Pre-Dynastic Period (about 3200 BC) began the practice of painting on linen, paint taking the place of dye. By the time of the Roman Imperial Period this longestablished practice was employed for the decoration of funerary shrouds, of which ours is an outstanding example. Our subject is an elite woman depicted wearing two garments. The first is a lavender coloured tunic, over both shoulders of which is draped a darker, purple- coloured shawl. The colours chosen are intentional marks of her status within society because during the Roman Imperial Period, purple was generally reserved for the clothing of the reigning emperor and members of his immediate family. Living in Egypt, this anonymous matron could wear the imperial purple with impunity. Her accessories include a pearl-like necklace which slips beneath the neckline of her tunic and elaborate earrings which are accurate depictions of actual earrings known to have been worn during this period. Her hair is deceptively arranged. It is not cut short, but is rather looped loosely around her ears and drawn up and tied at the back of her neck. She is shown standing against a background, but the damaged state of the shroud, due to its age, precludes a precise identification of the environment in which she is posed. In parallel examples, one often encounters a depiction of a