AGUTTES - A rediscovered masterpiece by Sanyu

Expert: Charlotte Reynier-Aguttes
Aguttes is pleased to announce the auction of a masterpiece by renowned Chinese painter Sanyu (1901-1966). The painting is from a private collection assembled from the late 1930s and was acquired directly from the artist in the late 50s. It has remained in the hands of the heirs of the original owner, Comtesse Locatelli until April 1990 when bought by a Spanish private collector who kept it until recently. This painting stands as a major piece in Sanyu’s career, for it highlights one of his favourite themes – potted flowers –, its bright and contrasting colours and its size. Potted peonies in a blue and white jardinière, unseen for 70 years, is estimated between €2,500,000 and €3,500,000.

Sanyu was born in 1901 in a province of Sichuan and showed great talent for art from an early age. His father encouraged his creativity and enabled him to take calligraphy lessons with Zhao Xi, an outstanding scholar at the prestigious Hanlin Academy. Keen on learning about the Western avant-garde, he moved to Paris in 1923. There, he was captivated by the incandescent art scene and quickly sought to reinterpret traditional Chinese painting.

He attended classes at the Académie de la Grande Chaumière, an avant-garde academy that encouraged the freedom of creative expression. Its students included several famous Western artists, such as Amedeo Modigliani and Alberto Giacometti. He was a brilliant with an inquisitive mind and formed connections with numerous figures of his time.

Within the environment of the École de Paris, he learned to combine aspects of his traditional Chinese education in calligraphy with the foundations of Western modernism, developing a style that united both the Eastern serenity and Western aesthetics. Largely influenced by Fauvism, he adopted its principles of composition and colour while integrating subjects from the Chinese culture into his work. In line with a long Asian pictorial tradition, he painted flowers in pots, vases or baskets. The result was an uncluttered, serene style where the simplicity and fluidity of line and gesture captured the essence of his subject.
The 1930s were a very productive period where his work was noticed by an art dealer with a keen eye, Henri-Pierre Roché (1879-1959), famous because of his active support for various modern artists like Picasso, Picabia, Brancusi, Man Ray and Dubuffet. Roché brought the artist out of the shadows and gave him the financial means to devote himself to his work. Sanyu’s productions in the 30s are highly recognisable because of their reduced palette. Pink was the predominant colour, whether for bodies, flowers or animals, set against opalescent white or inky black backgrounds. Though pink was in vogue in the 1930s, the choice of this shade was significant for Sanyu. He had married a comrade he had met in Paris in the drawing class at the Grande Chaumière and was going through a very happy period on the material, creative and emotional levels. His flowers, painted with firm, vigorous lines in frequently contrasting colours, brushed delicately gave life to the composition.

The theme of flowers is omnipresent in Sanyu’s art: he endlessly explored it in various versions throughout his career. Through these bouquets of flowers, Sanyu does not only propose the aestheticism of a still life; he also summons a cultural and spiritual reflection between East and West. As in the rest of his work, we can see changes in the pictorial treatment of his floral compositions. The development in the use of colours goes hand in hand with an increasingly powerful stylisation. The strokes become more incisive; the forms more graphic. The artist moves away from a direct representation of reality, creating more expressive works where the very essence of the subjects is intensified.

From the 1940s to the 1950s, shades of brown, jade green or China blue began to appear in Sanyu’s work, but he continued to contrast saturated colours with softer tones. His forms became simpler and the contrasts more marked, and he began play with different scales and points of view. His nudes became even more graphic, his flowers more stylised and his animals more symbolic, lost in vast natural expanses. Also, from the late 1940s onwards, an ever-growing disproportion between the plant and the pot containing it can be seen: it seems far too narrow to support the imposing spread of the flowers, which stretches out and elongates in the space. In order to admire them, viewers are forced to look at them from bottom to top, which creates an undeniable feeling of grandeur and admiration. In the 1950s, his flower paintings became a means to transform his solitude into a spiritual, joyful image.

Unlike his contemporaries Xu Beihong and Lin Fengmian, who had decided to return to China in the late 1920s and rapidly saw their ground-breaking work hailed and recognised, Sanyu had chosen to remain in Paris to continue his artistic quest. This decision cost him the recognition he could have had in China. His work remained misunderstood and known only to very few people during his lifetime. However, starting in the late 1990s, his work was gradually rediscovered, and several international retrospectives were dedicated to him. Today, Sanyu’s work has finally been acclaimed by the art world. 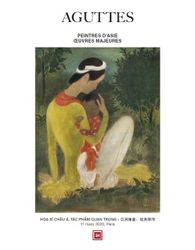